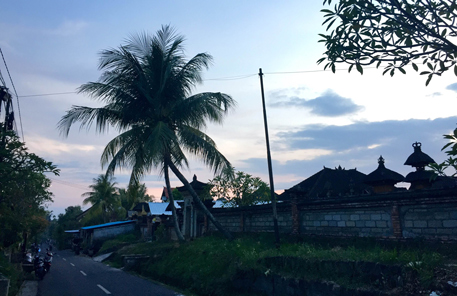 Having battled with getting things done ever since arriving here on Bali it has become clear that productivity, in a sense, is what appears when you have become one with your environment. When you have solved all of your basics, like getting food. Finding water. It is a product of mastering your immediate circumstances and coming out on top – and in doing so securing a baseline living that makes you feel fresh and focused. And once that is done, you get to reap the reward:

An effortless ability to create.

Which of course is preferable to the drag-yourself-to-do-it type of situation that is the way less efficient alternative.

So, what do you do when everything is upside down?

By figuring out what your basics are, and if they’re being met. And if not, you simply do your best to solve them. In my case the basics are sleep, nutrition, and exercise.

Sleep has been a problem, not only because of the 7-hour time-difference, but also because of these guys, screaming around the clock: 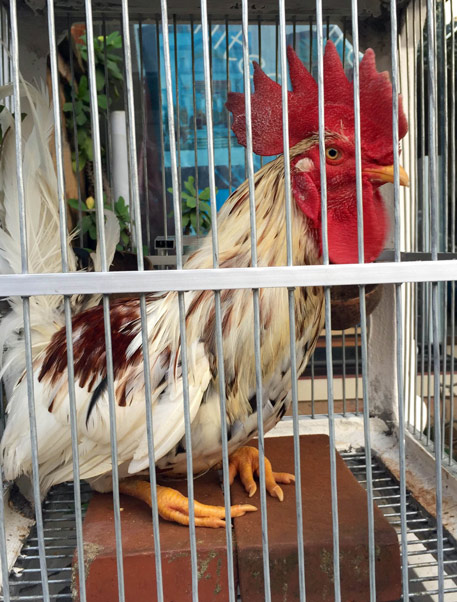 The disturbers of the peace. The original cage fighters (not really, but they fight each other and they live in cages). And that seems to be precisely the thing with the rooster-situation here, because there’s a correlation between the size of the rooster and its ability to fight. And the bigger the rooster, the louder it is. Which basically means that everyone wants one that is as loud as possible.

They’ll go to the rooster store and say: “I want the loudest one you’ve got.” And the clerk will answer with a shaky voice: “Are you s-s-sure?” And they’ll go “Yes. Bring me the loudest f*ing rooster.” And there will be a moment when their eyes meet.

Tension in the air.

A pearl of sweat, rolling down the forehead of the customer. The store goes quiet. The clerk, still looking the customer in the eye, isn’t sure what to do. A moment passes. A decision is made. And the clerk goes to a back room and collects the loudest, badest rooster in the house.

And that is why people can’t sleep now.

So, I solved that particular problem by moving away from what appeared to be the main rooster area. Unfortunately, I ended up on a street with quite possibly every stray dog in Ubud. But more on that later in this post.

Nutrition. That one had a less dramatic solution. Since the local cuisine mostly consists of carbs in more ways than I thought possible, eating out hasn’t been a good alternative as I aim for a low carb high fat diet (which is great for productivity). A few steaks and burgers, but other than that, I have taken matters in to my own hands. I give you… 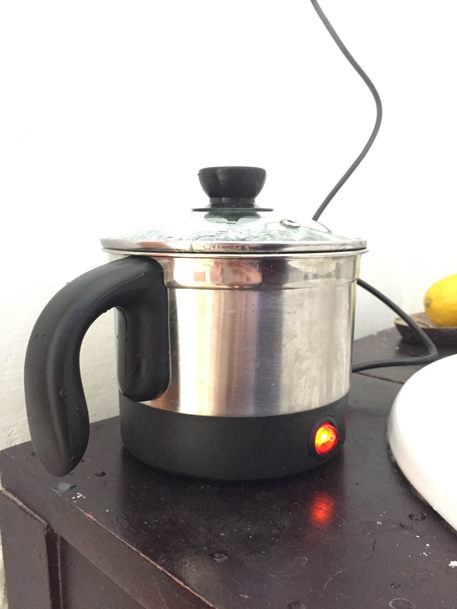 I bought it at the supermarket for the price of 160 000 IDR (about 12 dollars) and now I am able to secure a baseline nutrition of boiled eggs, which I eat with butter, and “Hacked Noodle Soup” (noodle soup without the noodles plus coconut oil and grilled chicken from the store).

Exercise. There is a gym here. In the local currency it’s the price of a steak at a half-western restaurant, which is a lot, but worth it. It’s cool, you get free water and you get to manage your stress while keeping the endorphins and dopamine flowing.

However, in the last blog I stated that I would keep things real.

Sleep is still an issue. In fact, the dogs on the street outside the new place is more of a problem than the roosters ever were. What is more, there seems to be a war going on between two rivaling dog-gangs, and the showdown place is a small pathway connecting two larger streets, just behind my bedroom.

It sounds like I am making this up. From the bottom of my heart: I wish that were the case.

They meet up to bark at 1-2 am, which makes falling asleep almost impossible. Especially after taking a shower as the bathroom is of a beautiful typical Balinese style with no glass in the window.

In the middle of the action.

After the dogs not being able to decide on a winner of the barkathon, they go their separate ways, only to resume business as usual of barking at absolutely anything that moves.

Incidentally, there is a lot of movement between 6 am and 9 am.

So, the pursuit of productivity goes on, and I am currently looking at other options, like moving to Canggu, which according to those in the know doesn’t have stray dogs.

Also, it’s by the ocean and I sort of miss it.

And thank you for reading,
/Filip